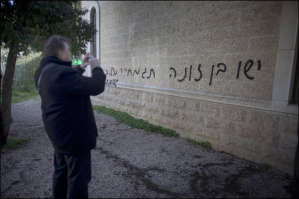 "(Reuters) - Suspected hardline Israelis scrawled pro-settler graffiti and religious insults on a monastery just outside the walls of Jerusalem's Old City on Tuesday, police said, in the latest of a series of attacks on non-Jewish sites.

The vandals wrote the phrase "price tag" in Hebrew on the gate of the Franciscan Dormition monastery on Mount Zion - a reference to a violent campaign supporting unauthorized settlements in the Israeli-occupied West Bank.

The "Price tag" is the retribution some Israeli settlers say they will exact for any attempt by their government to curb settlement in the territory, which Palestinians want as part of a future state.
The group has targeted mosques and, less commonly, Christian churches, regarding any non-Jewish religious sites as an intrusion on the land.

It was the second attack on a Christian building in less than a month.
"Price tag" attackers set fire to the doors of Latrun monastery in the West Bank on September 4 in a possible retaliation for the eviction of families from an unauthorized outpost......"
Posted by Tony at 4:16 AM