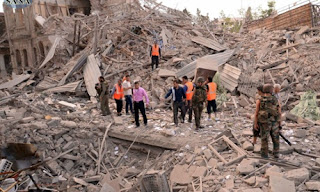 
They monitored the movements of [Abu Abbas] for days, until they managed to [kill] him while on his way to one of Hezbollah’s [offices in Syria].......


In a call to the broadcaster Abu Firas Al Halabi, a spokesperson for the Revolution council, said: "Three blasts at Saadallah al-Jabri Square located in the heart of Aleppo have occurred. These bombs targeted the soldiers' military club."
He also reports violent clashes between the Free Syrian Army and the regular army in different parts of Aleppo, notedly, Al Idhaa Street, al Arqoub Street.
And a battle around Aleppo international airport, he said

The Syrian Observatory for Human Rights also claimed a military club was the target of the blasts......"