Is Jordan about to experience its first big moment of the Arab spring?


Protests planned in Amman could see confrontation between opposition and loyalists 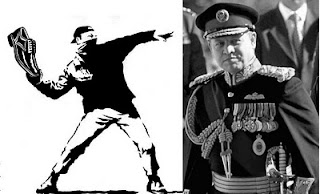 ".....So is Arab spring unrest about to hit the Hashemite kingdom? On Friday the IAF is organising a big rally under the resonant slogan "Save the Homeland." Its target is the constitutional changes the king has approved in advance of parliamentary elections he says must be held by the end of the year — though the increasingly vocal IAF says the reforms are inadequate and insists it will boycott the polls. That would render them meaningless.

The IAF has been emboldened by the successes of the Muslim Brotherhood in Egypt and Tunisia and by the prominent role it is playing in the uprising in Syria next door. Complicating matters, many of its supporters are Jordanians of Palestinian origin, always a sensitive issue, as is the peace treaty with Israel. The Obeidat, a large East Bank clan, has just disowned one of its members who has accepted the post of Jordanian ambassador to Tel Aviv.

The king is under pressure from his western friends to respond convincingly to growing demands for change. Crucially, though, he plans to retain the power to appoint the prime minister and dismiss parliament at will. Overall the proposed new electoral system is still rigged in favour of regime supporters; Palestinian-Jordanians in particular will be significantly under-represented. Critics complain that reforms are more apparent than real......"
Posted by Tony at 9:13 AM