Morsy in Turkey: Gaza border is open (NOT TRUE; HE IS LYING), Syria repression must end

Morsi is plainly lying. Not only the Rafah crossing is not open, but his government has actually destroyed more tunnels between Egypt and Gaza than the Mubarak government.

Even the Hamas government, which is a branch of the Muslim Brotherhood, is saying that. It (Hamas) is protesting the closure and is holding demonstrations in Rafah against the closure and the demolition of the tunnels. 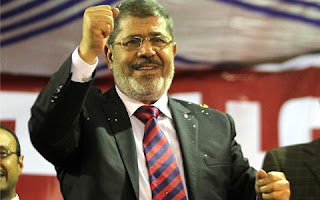 “Egyptians can never stand by helplessly when they see the people of Gaza under siege,” Morsy said in remarks broadcast on Egyptian state television. “The border crossings between us and Gaza will remain open to fulfill the needs of the people of Gaza, including food, medication, education and communication between families.”....."
Posted by Tony at 4:30 AM

how do you know that the crossing has not been opened?

Can you show me a link or something? thanks

Please see the third and fourth posts above.