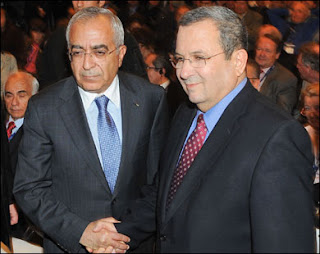 "In recent weeks, the Palestinian Authority (PA) has been in a worsening financial crisis, chronically unable to pay the salaries of its 150,000 workers on whose docility its survival depends.
But while PA “prime minister” Salam Fayyad, would love to be able to meet payroll now, that was not always the case.
Reading through a leaked confidential US government cable from 9 May 2006, I came across a little gem:


Presidential Advisor Akram Hanniyyah and PLC member Salam Fayyad commented to [US] Consul General [Jacob Walles] in separate May 9 meetings that the payment of PA salaries is a critical issue. Hanniyyah pressed for immediate disbursement of the USD 70 million in Cairo, saying it would shift the press story from US blocking bank transfers to Hamas’ inability to govern, once those donations were expended. By contrast, Fayyad thought that any movement on salaries now would let Hamas off the hook and was ill-advised......"