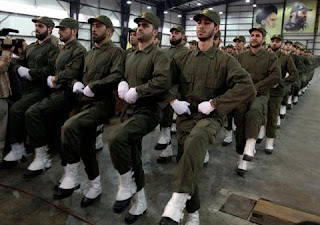 The Lebanese Daily Star is now reporting on the death of Ali Hussein Nassif, the Hezbollah commander who was killed "while performing his jihadi duties" – presumably in Syria.

It says his funeral, near Baalbek in the eastern Bekaa valley, was attended by top Hezbollah officials including the head of the group's judicial council, Sheikh Mohammad Yazbek, and the head of the political bureau, Sheikh Ibrahim Amin al-Sayyed.

But Nassif was not the only one ...


On Tuesday, Hezbollah's al-Manar television showed the funerals of at least two other Hezbollah members it said were killed while performing their "jihadi duty".

It said one of the group's members, Zein al-Abideen Mustafa, was buried in his hometown of Baalbek, while another Hezbollah member, Hussein Mohammad Hussein Diab, was buried in his hometown of Ghassaniyeh in southern Lebanon. Both funerals were attended by Hezbollah officials and commanders.
The coffins of the dead were draped with Hezbollah's yellow flags and carried by militants in black uniforms and red berets. Hundreds of people marched in the funeral.

Hezbollah has so far declined to give any explanation on the circumstances of their deaths....."
Posted by Tony at 2:01 PM