Egypt and Gaza: A honeymoon that wasn’t 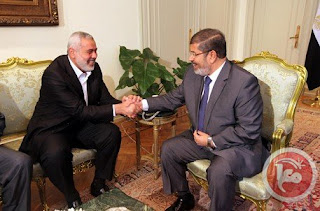 "ABOVE Gaza’s parliament hangs a tableau of two smiling Islamist leaders. Muhammad Morsi, the new president of Egypt, and Ismail Haniyeh, prime minister of the neighbouring Gaza Strip, which is run by Hamas, the Palestinians’ dominant Islamist movement. The two men are raising their hands together, hailing a regional dawn against a backdrop of Cairo’s pyramids. The billboard’s message is that the new Egypt, under a Muslim Brother, recognises Hamas, originally a Brotherhood branch, as its new ally—and as the legitimate authority in Palestine.

But Hamas’s smiles, so gleeful after Mr Morsi’s election in June, have turned to frowns since Mr Haniyeh’s latest visit to Cairo. An expected meeting with Egypt’s president never happened. A 20-man Hamas delegation that presented plans to upgrade Gaza’s connection to Egypt’s electricity grid, speed up the transfer of fuel donated by Qatar and open a free-trade zone on their common border returned with nothing nailed down. “They say they’re still studying the files,” says one of Mr Haniyeh’s glum colleagues.

Instead, it all sounded much like the old Egypt......"