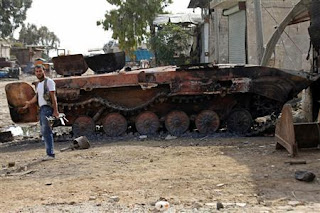 (20 photos)
"(Reuters) - Fires that gutted a vast historic market have broken out in other areas of the Old City of Aleppo, a world heritage site, as rebels and government forces fight for the ancient heart of Syria's biggest city, opposition activists said on Monday.

The rebels last week announced a fresh attempt to seize the wider city, home to 2.5 million people, which was until July firmly under the control of President Bashar al-Assad.

With government forces holding the large medieval citadel in the heart of the Old City, the fighting that has already claimed more than 30,000 lives across Syria seems certain to destroy more cultural treasures too.
"Rebels control more that 90 percent of the Old City now," said Ameer, an opposition activist working with rebel brigades.

But he said they were struggling to hold their positions under heavy artillery fire......


UNESCO believes that five of Syria's six world heritage sites have already been damaged. The other sites include the ancient desert city of Palmyra, the Crac des Chevaliers crusader fortress and parts of old Damascus."