Mursi to speak as Egypt's Islamists seek way out of crisis 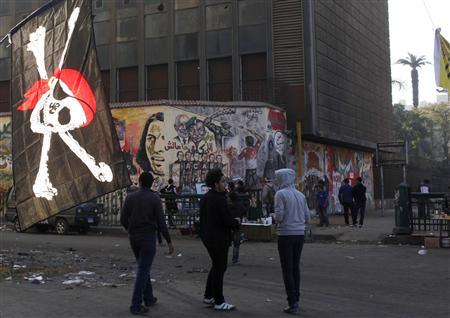 "(Reuters) - The body writing Egypt's new constitution began a session to vote on a final draft on Thursday, a move President Mohamed Mursi's allies in the Muslim Brotherhood hope will help end a crisis prompted by a decree expanding his powers.....

MURSI SAYS HE IS NO PHARAOH

Leading opposition figure and former Arab League chief Amr Moussa slammed the move to accelerate the constitution. He walked out of the assembly earlier this month. "This is nonsensical and one of the steps that shouldn't be taken, given the background of anger and resentment to the current constitutional assembly," he told Reuters.

The decree issued by Mursi has set him further at odds with opponents and worsened already tetchy relations with the judges, many of whom saw it as a threat to their independence. Two of Egypt's courts declared a strike on Wednesday.

Mursi was unrepentant in the interview published overnight....."
Posted by Tony at 6:55 AM