All Governments Should Press Damascus to Stop Using Cluster Munitions 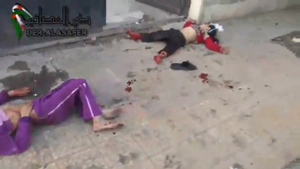 “This attack shows how cluster munitions kill without discriminating between civilians and military personnel,” said Mary Wareham, arms division advocacy director at Human Rights Watch. “Due to the devastating harm caused to civilians, cluster bombs should not be used by anyone, anywhere, at any time.”

According to video footage and testimony from local residents, at least 11 children were killed in the strike on Saraya neighborhood in the eastern part of Deir al-`Assafeer. Two residents told Human Rights Watch that the cluster bomb strike occurred as a group of at least 20 local children were gathered in a field where they usually play......"