Ten children killed and 40 injured in incident near Damascus, which opposition claims was caused by outlawed weapon 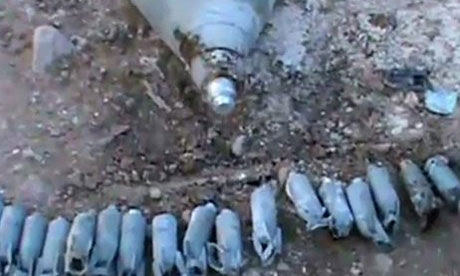 "The death of 10 children in an apparent cluster-bomb attack near Damascus has been widely condemned by human rights groups, which claim that the outlawed weapons have been increasingly used by the Syrian regime against civilians over the past two months.
Images of the dead and wounded children were uploaded to the internet by residents of the town of Deir al-Asafir, hours after a vacant block of land where children had gathered was hit.
The uploaded videos also showed scores of spent cluster bomblets, with the shells they were discharged from. Small indentations in the ground, where some of the bomblets had landed, were also visible, along with a large shell embedded deep in the soil.

"May God punish you, Bashar," one of the residents is heard saying of the Syrian president, Bashar al-Assad, as a video pans across a room of dead children, many of them wrapped in white shrouds. Residents contacted in the town claimed that up to 40 people, some of them children, had been wounded.
Opposition groups have insisted since late in the summer that the Syrian regime has been using the banned weapon – a claim that has been denied by officials in Damascus.

There was no independent confirmation of the attack. However, numerous images of spent shell casings have now been published from opposition-held parts of the country. None had so far had the visceral effect of the gruesome footage from Deir al-Asafir, which is believed to mark the first time in the Syrian conflict that cluster bombs have killed a large number of victims.
"It is the first confirmed video that we have seen of what has been an increasingly clear use of these munitions," said Peter Bouckaert, emergencies director of Human Rights Watch. "The vast majority of the casualties have been caused by ordinary dumb bombs. These are very different. They are Soviet-made weapons and they are dropped from jets, which is a clear indication of who's responsible, because the opposition doesn't have warplanes."......."