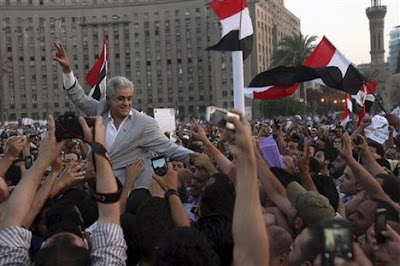 "CAIRO: Egyptian activists received a boost late on Friday as the founder of the Constitution Party Mohamed ElBaradei, head of the Conference Party Amr Moussa and founder of the Popular Current Party Hamdeen Sabahi all declared their support and participation in the ongoing sit-in in Cairo’s Tahrir Square until President Mohamed Morsi’s constitutional decree is revoked, spokesman of the National Front for Salvation Hussein Abdel Ghani was quoted as saying.

It is the latest action by opposition leaders to continue pressure on Morsi and the Muslim Brotherhood to listen to the people’s will over the decree and the constitution, which Morsi is expected to approve on Saturday and put forward for popular referendum.
Egypt’s constituent assembly finalized on Friday morning the draft constitution by consensus.

The draft will be presented to President Morsi on Saturday in preparation for putting it to a popular referendum.......


Egypt is facing a political impasse many say is similar to early days of the January 2011 uprising that toppled Hosni Mubarak."