Syrian rebels report capture of air base near Damascus 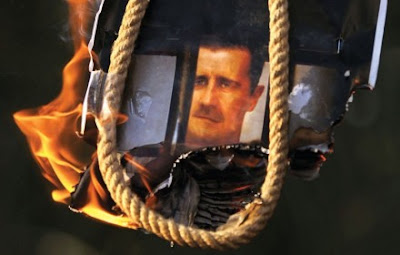 "(Reuters) - Syrian rebels said on Sunday they had captured a helicopter base 15 km (10 miles) east of Damascus after an overnight battle, the second military facility on the outskirts of the capital to fall to President Bashar al-Assad's opponents this month.

An Internet video which activists said was filmed at the Marj al-Sultan base showed rebel fighters carrying AK-47 rifles touring the facility. An anti-aircraft gun could be seen positioned on top of an empty bunker and a rebel commander was shown next to a helicopter.

"With God's help, the Marj al-Sultan airbase in eastern Ghouta has been liberated," the commander said in the video. Eastern Ghouta, a mix of agricultural land and built-up urban areas, has been a rebel stronghold for months.

Activists said two helicopters were destroyed in the attack as well as a radar station, and that 15 personnel were taken prisoner......"
Posted by Tony at 7:09 AM