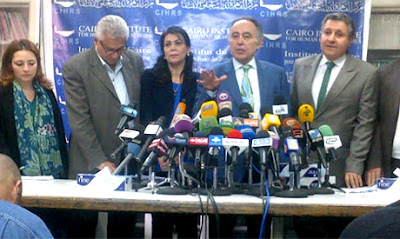 "A number of prominent human rights groups have called for a re-run of the first phase of Egypt's constitutional referendum due to numerous violations reported during polling on Saturday.


"Despite the revolution, we had a referendum like those held during the Mubarak era," Cairo Institute for Human Rights Studies (CIHRS) leader Bahi El-Din Hassan said at a press conference on Sunday.

Hassan went on to list several types of violations that "invalidate the whole [referendum] process."
For example, there were cases of 'fake' judges overseeing the voting at polling stations.

He also accused several judges of closing polling stations early despite an order by the Supreme Electoral Commission (SEC) to extend voting until 11pm.

Human rights lawyer Negad El-Borai added that members of civil society organisations were banned from entering polling stations. However, members the Freedom and Justice Party were given permits to enter polling stations and sometimes used that access to encourage people to vote 'Yes'.

"We have reported all the violations, but there has been no response from the SEC," added El-Borai, who questioned how the SEC could release statements denying violations had occurred without investigating them....."
Posted by Tony at 9:34 AM

Hello there, You've done an excellent job. I will definitely digg it and personally recommend to my friends. I am confident they will be benefited from this website.
My web page :: geld im internet verdienen

These are truly fantastic ideas in about blogging.
You have touched some nice factors here. Any way keep up wrinting.
My web page ; binary options Demo account

you're really a good webmaster. The web site loading velocity is amazing. It sort of feels that you are doing any distinctive trick. Also, The contents are masterwork. you have performed a fantastic activity in this topic!
Feel free to visit my website :: affiliate marketing consultant