Polling stations across Egypt seemed to be marred with irregularities - is no one in charge? 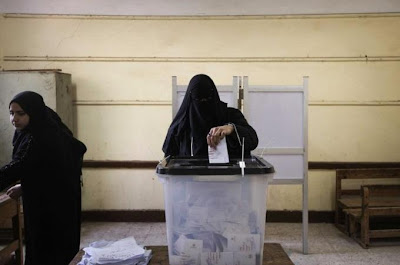 "....Democracy is not simply a matter of elections and majority-rule; it is perhaps more importantly a safeguarding of ideals of freedom and justice - the same ideals which inspired the January 25 Revolution and for which the revolutionaries continue to lobby. Many embittered revolutionaries will remain opposed to the current draft of the constitution, even if it is passed by popular vote, precisely because it is not written in the revolutionary spirit, for which many sacrificed and died, and without which Mr Morsi and dominating Islamists would have never had the opportunity to rule. That the voting process proceeded with so much opposition reveals a government unwilling to compromise or hear the demands of its people, especially the people who enabled it to come to power. A constitution that is illegitimate in the eyes of many activists has only been undermined further by a highly flawed voting process, regardless of the outcome of the vote."
Posted by Tony at 6:35 AM