I beg to differ with Egyptian liberals

Given that Gaza is Egypt's first line of defence against Israeli aggression, it should be a priority for President Morsi 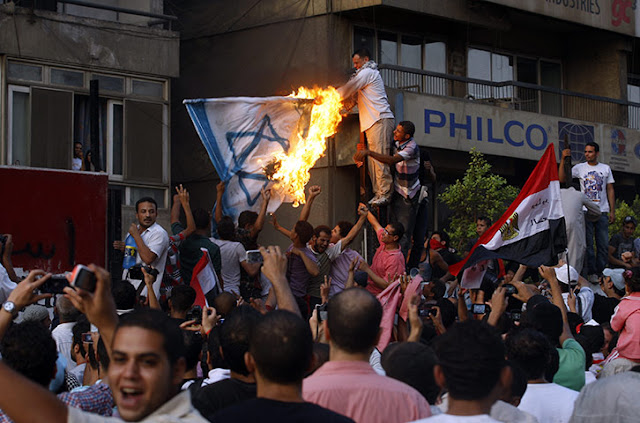 "During a recent episode of Al-Ittijah Al-Muaakes (The Opposite Direction) on Al Jazeera, an Egyptian liberal lambasted President Mohamed Morsi "for paying ample attention to his comrades in Gaza at the expense of the Egyptian people."

The guest, who seemed quite exasperated and convulsive, argued that Morsi should have devoted more of his time to tackling the numerous problems facing the Egyptian people.....

Whether we like it or not, Israel has been, is and will always be Egypt's existential enemy. There is a preponderance of evidence corroborating this fact. True, the principled Israeli enmity toward Egypt is strongly connected with Egypt's historical opposition to Zionism and the creation of Israel in Palestine. Egypt fought several wars with Israel and a gulf of blood and fire still separates the Egyptian people from the Zionist entity.

Yes, the two states reached a peace treaty in 1978. However it is crystal clear that the Camp David treaty, which the Egyptian leadership signed more or less under duress, did very little to put an end to undeclared but definitive Israeli designs against Egypt.

For this reason, most Egyptians consistently refused to "normalise" relations with the Jewish state, causing widespread consternation in Zionist circles, which sought to instigate successive American administrations against Egypt, including the Mubarak regime.

Israel wanted to use the Camp David treaty to strip Egypt of its Arab and Muslim character as well as cause irreparable damage to the collective conscience and consciousness of the Egyptian people. However, thanks to the enduring vigour and strong moral fabric of the Egyptian people, the morbid Israeli designs were a gigantic fiasco.
According to Israel Shahak's book, Jewish History, Jewish Religion: The Weight of Three Thousand Years, much of Egypt is actually part of Biblical Israel according to some sages of the Talmud. This mythology is taught to Jewish students in hundreds of Talmudic schools (yeshivot) and colleges throughout Israel.

I would have thought that these ideas were no more than mythical hallucinations on the part of some deranged so-called 'sages'. But when I found out that many otherwise level-headed rabbis kept regurgitating these myths, I began to view the matter differently.

In the final analysis, those who urge their people to follow the example of Joshua in dealing with the Palestinians (murderous ethnic cleansing) are capable of embarking on the unthinkable.....

Even today, 36 years after the conclusion of the Camp David treaty, Israel continues to threaten Egypt. On several occasions, Israeli officials threatened to bomb the Aswan High Dam and incite non-Arab Nile basin countries to disrupt water inflow to the Nile.

Israeli Foreign Minister Avigdore Lieberman, who wanted to annihilate the Palestinians and throw handcuffed political prisoners into the Dead Sea, called for ruining Egypt economically, politically and even morally. The Egyptian media reported on several occasions the arrest of Israeli agents with instructions to spread the AIDS virus in Egypt, generate chaos, including sectarian conflicts between Muslims and Copts.....

Palestine, especially the Gaza Strip, is Egypt's first line of defence against Israeli hegemony and aggression. A strong Gaza should therefore be viewed as a strategic asset for Egypt and vice versa.

In real terms, this means that a strong Gaza which can repulse or at least deter Israeli aggression will strengthen Egyptian national security. Israel had sought on several occasions to revive old plans to transfer Palestinian refugees to the Sinai Peninsula. However, it was the Palestinian leadership whether in Gaza or Ramallah that resolutely rejected the insidious designs.

In truth, discordance between Egypt and the Palestinians would be a real calamity for both that would only benefit Israel as well as the common enemies of Egypt and Palestine....."
Posted by Tony at 7:38 AM