Bethlehem has been "isolated and fragmented" in a way that would devastate any town or community the world over. 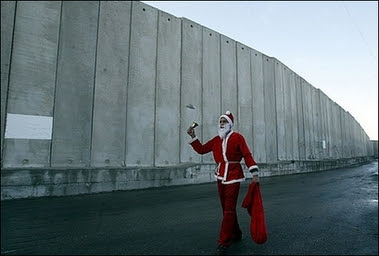 "At the main checkpoint to enter Bethlehem there is a large sign placed on the Separation Wall by Israel's ministry of tourism which says "Peace be with you". An appropriate symbol for Israel's colonial strangling of the "little town", this propaganda for pilgrims is a crude microcosm of Israel's habit of talking "co-existence" while pursuing apartheid.

Over decades of Israeli military rule, more and more land around the city has been annexed, expropriated and colonised, with 19 illegal settlements now in the governorate. Eighty percent of an estimated 22 square kilometre of land confiscated from the north of the Bethlehem region was annexed to the Jerusalem municipality in order to expand settlements (see this briefing).

Beit Sahour, home of the Shepherds' Fields where it is said the angels announced the birth of Jesus, has been hit hard by Israel's colonial regime, losing 17 percent of its land to the expansion of Jerusalem's municipal boundaries. The Wall loops around 10 percent of the Bethlehem region's land, and the UN estimates that only 13 percent of the governorate is available for Palestinian use. In and around the city, there are over 30 physical barriers to Palestinian freedom of movement imposed by the Israeli military. Bethlehem has been isolated and fragmented in a way that would devastate any town or community the world over......"