The president's people and clan

Although the Muslim Brotherhood's participation in Egypt's post-revolution democratic transition was essential, the group has since shown it will do anything to hold onto power 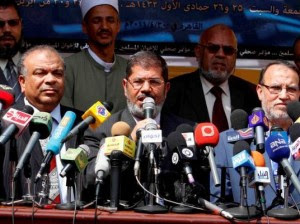 ".....Unfortunately, time has shown that I was wrong about the Brotherhood's ability to transition from the mentality of targeted victims into the ruling elite at the helm. The Brotherhood was neither able to shed the mentality of persecution or present real solutions to the country's troubles.....

Instead of holding Brotherhood leaders accountable for their fiery statements that fanned the flames and caused this tragic outcome, the president blamed a 'third party' and fulul. Meanwhile, he ignored many torture incidents that Brotherhood members inflicted on protestors outside the palace – which groups that monitor torture in Egypt said they had never witnessed, even under Mubarak.

The president forgot that, by ignoring these acts by his people and clan, he was undermining the pillars of the state he is responsible for upholding, eroding his already frail legitimacy and deepening the fractures in society.

I was optimistic about the Brotherhood's ability to overcome the historic challenges they were facing; last month, I participated in a public debate about whether democratic transition in Egypt had been disappointing. I rejected the premise and said that, although democratic transition was marred by some defects in the beginning, the future would prove that the Brotherhood would realise the importance of democracy and embrace it.

But after the events of the past two weeks, I was proven wrong once again. The events of Wednesday, 5 December unveiled the Brotherhood's aversion to democracy and fear of the people's right to express themselves. It also showed how far the group was willing to go to maintain its grip on power and hold it tight.

History will also record that President Morsi proved on that day that he obeys the orders of MB leaders, and that he lost an opportunity to become the president of all Egyptians and made do with being the leader of one segment of Egyptians. It is that segment that he courted and called his people and clan."
Posted by Tony at 1:17 AM