Egyptians are being held back by neoliberalism, not religion


President Morsi claims the opposition is an anti-Islamist elite. In fact, he is losing support because of his economic policies 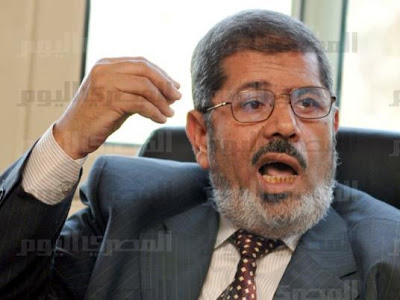 ".....But if Egyptians are, as results indicate, losing faith in the Brotherhood, it isn't because the organisation is Islamist, but because it has so far been rubbish at ruling. Many believe the Brotherhood has kept its promises to power, but not to the people. Crucially, President Morsi's economic policy has deepened the neo-liberalism that brought so much misery during the Mubarak era and was a key component of the uprising against him.
This economic stamp is all over Morsi's policies, both before and as a part of the proposed constitution – which was completed in a one-day marathon, by an Islamist-dominated assembly, after Christian, liberal and female members walked out. In early December he announced an end to fuel subsidies – so household bills for gas cylinders and electricity, for example, are set to spike.

Meanwhile, an IMF loan of $4.8bn currently being negotiated is conditioned on what has been described as the biggest wave of austerity cuts since 1977 – when subsidies on staple foods were removed in one crippling hit, prompting the "bread riots". Today the plan is to reduce public spending, cut subsidies, increase tax on basic goods, and devalue the Egyptian pound. This package was delayed because of the current turmoil. But why should Egyptians swallow such a Shock Doctrine-style deal, when one of the key tenets of the revolution was a call for social justice?
Meanwhile, the proposed constitution reveals more of the Brotherhood's conservative economics. It has a clause that pegs wages to productivity. It stipulates that only "peaceful" strikes (whatever that means) are allowed. It keeps military interests intact and invisible to public scrutiny – in a country where the army is thought to own anything from 10% to 45% of the national economy (nobody knows for sure because it's all so secret). It is all more evidence that Morsi is not, as he claims, trying to "protect the revolution", but wants to protect the interests of an entrenched elite at the expense of everyone else. Indeed, this year a Bloomberg report referred to the wealthy, controlling echelons of this Islamist group as the "Brothers of the 1%".
Small wonder, then, that the factory-dense city of Mahalla declared itself an independent state, in protest at Morsi's anti-union laws. Since he came to power there has been a wave of strikes; not just factory stoppages but also health worker strikes and consumer protests at eroding public services. And Egypt's rapidly growing independent unions have been mobilising nationally against the constitution, using its trampling of social justices as the hook......

But while his economic policy makes Morsi unpopular on the streets, it is precisely what makes him acceptable to the west: power-serving economics coupled with a foreign policy that doesn't rock any regional boats, crucially with Israel. Using standard paternalistic filters, the US is banking on the idea that the Brotherhood's religious credibility will underwrite its reactionary politics, thereby maintaining the status quo. In this sense, the American administration doesn't really care if it's a Mubarak or a Morsi in power, as long as these interests are preserved......"
Posted by Tony at 4:34 AM