Censorship could be as bad as under previous regimes, as cultural figures feel the pressure 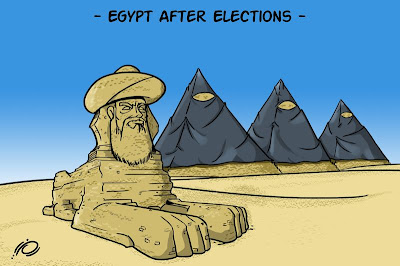 "Leading Middle Eastern cultural figures and academics have warned that the arts of the Arab spring are under threat because of increasing violence, censorship and lack of political vision.

The popular perception that the region is experiencing unprecedented freedom of expression is "simplistic and misleading", with many artists "wary of the increasingly violent nature of the Arab spring", according to a study for the British Council by the postwar reconstruction and development unit at York University. The report, Out in the Open: Artistic Practices and Social Change in Egypt, Libya, Morocco and Tunisia, found that the system of strict government censorship that has existed for decades is "largely still in place"........

"I think we are at a brink point. The Muslim majority [in Egypt] could just react and suppress artistic expression even more than Hosni Mubarak," Barakat said. The Egyptian playwright Ahmed el-Attar said: "I'm afraid the country is sliding towards fascism. So far culture has been kept on the side. The Muslim Brotherhood don't yet have a cultural agenda. They're talking about focusing on historical Islamic figures. I'm not sure that applies to the Salafis, who question the notion of art itself."......


Writer Ahdaf Soueif, who documented the uprising in her book Cairo: My City, Our Revolution, said she opposed engaging with Mohamed Morsi's government about the future of the arts amid the protests about the president's attempted power grab. "Engaging with them on that level is wrong. They are in no way a government of the revolution."....."
Posted by Tony at 12:21 PM