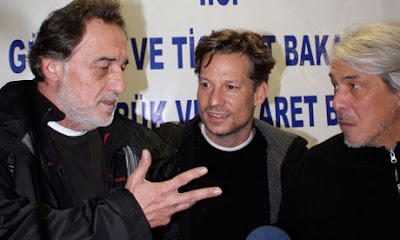 "When the threats of execution began for the team of NBC journalists kidnapped by a group in Syria loyal to President Assad, they were underlined by a terrible reality.

For even as Richard Engel and his colleagues working for the US television network were taken into captivity five days ago, blindfold and bound, it was in the knowledge that one of their rebel guides had already been shot and killed.

Their ordeal came to an end at 11pm on Monday in a dramatic gun battle when a group of opposition fighters discovered and freed Engel and four other members of his team – including producer Ghazi Balkiz, cameraman John Kooistra and an unnamed engineer – who were being moved by car.

"As we were moving along the road, the kidnappers came across a rebel checkpoint, something they hadn't expected. We were in the back of what you would think of as a minivan," an unshaven Engel told NBC's Today programme.
"The kidnappers saw this checkpoint and started a gunfight with it.
"Two of the kidnappers were killed. We climbed out of the vehicle and the rebels took us. We spent the night with them."
"It was a very traumatic experience," Engel said. He said he believed the kidnappers were a Shia militia group loyal to the Syrian government, adding that they executed at least one of his rebel escorts on the spot at the time he was captured.
"They kept us blindfolded, bound," said the 39-year-old reporter, who is one of the most high-profile television foreign correspondents in the US.
"We weren't physically beaten or tortured. A lot of psychological torture, threats of being killed. They made us choose which one of us would be shot first and when we refused, there were mock shootings," he added.
"They were talking openly about their loyalty to the government," said Engel.
"This was … the Shabiha. This is a government militia. These are people who are loyal to President Bashar Assad."....."