Syria: after Assad falls, what then?

The alliance between foreign jihadists and some Syrians shows the fight for Syria will not end with the fall of the regime
Haytham Manna
The Guardian, Monday 17 December 2012 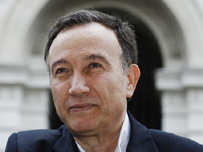 ".....Support for al-Nusra can be seen as both a symptom of the drunkenness of anticipated military victory, prematurely proclaimed, and an attempt to further undermine the political solution the UN still seeks. What happens as a result will not be decided by a conference in Marrakech, but on the ground. One thing is certain: the fight for Syria will last a long time, and will not end with the fall of the regime."
Posted by Tony at 4:28 AM