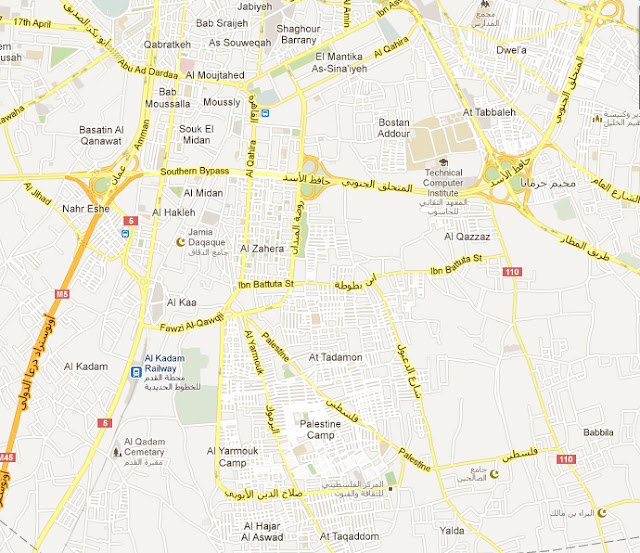 "At least one rocket from a Syrian air force jet has killed and wounded dozens of Palestinians in the largest refugee camp in Damascus, sending thousands of residents fleeing for other areas of the capital now wracked by civil war.

Sunday's attack is believed to be the first strike against the Yarmouk camp by an air force jet, the most potent weapon used so far by the regime in its defence of the capital. The rocket hit a mosque near the centre of the camp, killing at least 25 people, Reuters reports. There was panic in the area near the mosque. Videos posted online showed the dead and injured being collected by residents.

The exodus sparked predictions that the flood of refugees into neighbouring countries, which is already straining resources in Lebanon, Jordan and Turkey, will further intensify, with Syria's Palestinian population of 500,000 increasingly caught in the middle of the bitter and protracted fighting....."
Posted by Tony at 8:09 AM

the situation is more complex:
http://english.al-akhbar.com/content/syria-armed-opposition-takes-yarmouk-refugee-camp