How Hollywood helped sanitise the 'war on terror'

A Top Gun drone sequel is planned - will it be the latest in a series of films that prime the US military's image? 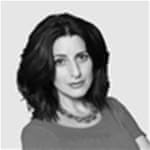