Nuclear talks in Vienna have been extended by three more days [and more, and more,......] amid disagreements between Russia and the west over lifting an arms embargo on Iran.
The discord among the six global powers negotiating with Iran in the Austrian capital has further complicated the already detailed and technical talks. Other differences over the timing of sanctions relief, verification and transparency had forced a week-long postponement of the original deadline until Tuesday night.
Marie Harf, a US State Department spokeswoman, said on Tuesday that interim terms freezing Iran’s nuclear programme had been extended again to Friday. 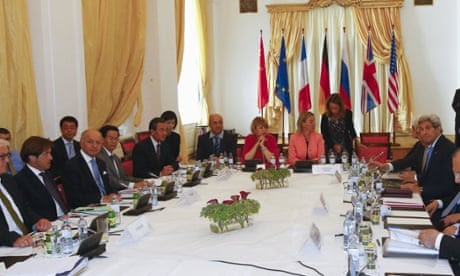 Read more
“We’ve made substantial progress in every area, but this work is highly technical and high stakes for all of the countries involved,” Harf said. “We’re frankly more concerned about the quality of the deal than we are about the clock, though we also know that difficult decisions won’t get any easier with time – that is why we are continuing to negotiate.”
This week the Iranian delegation made public its desire for the arms embargo to be lifted, adding it to Tehran’s list of demands in return for accepting strict curbs on its nuclear programme for a decade at least.
The US and its western European allies have offered relief from economic and financial sanctions, but are resisting an end to the arms embargo, concerned about Iran’s military support for armed groups across the region.
At the negotiations in a hotel in the Austrian capital, the Russian foreign minister, Sergei Lavrov, supported the Iranian position. China is also understood to have given it quieter backing.
Lavrov left the talks on Tuesday afternoon, telling reporters that the arms embargo was the most important remaining issue, although he said eight or nine other issues “have to be polished”.

Iranian businesses eye the trade that ending sanctions would bring, but say: don’t expect a Russia-style gold rush – we already have a free market
Read more
The French foreign minister, Laurent Fabius, also left Vienna, saying he would return late on Wednesday night. He listed the three most difficult remaining issues as long-term limits on Iranian research and development, a mechanism for re-imposing sanctions if Tehran violates the agreement, and Iranian transparency over claims of past work on nuclear weapons design.
The UK foreign secretary, Philip Hammond, was also expected to leave the talks temporarily.
Ali Vaez, an Iran expert at the International Crisis Group, suggested that the impasse over the arms embargo could be resolved in a couple of ways. “One way [would be] to review the arms embargo a few yeas from now, but that is unattractive to the Iranians because finding objective criteria for lifting it would be difficult and Iran would see it as a formula for keeping the embargo indefinitely,” Vaez said.
“The other solution is turning a binding arms embargo into a non-binding embargo, so the security council would urge countries not to trade in arms but would not ban it.”
Posted by Tony at 8:25 AM