Guardian Global development is supported by:

About this content
Sam Jones in London andKareem Shaheenin Beirut

352
The conflict in Syria has now driven more than four million people – a sixth of the population – to seek sanctuary in neighbouring countries, making it the largest refugee crisis for a quarter of a century, according to the UN.
On Thursday, the UN refugee agency, UNHCR, said the total number of Syrian refugees in Turkey, Lebanon, Iraq, Jordan, Egypt and other parts of north Africa stood at 4,013,000 people.
With at least 7.6 million people forced from their homes within Syria, almost half the country’s people are either refugees or internally displaced. The conflict, now in its fifth year, has killed more than 220,000 people.

Syrian refugees: 'A whole generation is growing up displaced and uneducated'

Patricia Mouamar
Read more
António Guterres, the UN high commissioner for refugees, said the exodus was the biggest refugee population from a single conflict in a generation and called on the international community to step up.
He said: “It is a population that needs the support of the world but is instead living in dire conditions and sinking deeper into poverty.
“Worsening conditions are driving growing numbers towards Europe and further afield, but the overwhelming majority remain in the region. We cannot afford to let them and the communities hosting them slide further into desperation.”
Turkey is now the largest refugee-hosting country in the world, sheltering 1,805,255 Syrians. Lebanon has taken in 1,172,735 Syrian refugees, Jordan 629,128, Iraq 249,726 and Egypt 132,375. About 24,055 Syrians are refugees elsewhere in north Africa. The latest UN figures do not include the more than 270,000 Syrians applying for asylum in Europe, nor the thousands resettled from the region elsewhere.

The milestone of four million comes just 10 months after the number of Syrian refugees hit three million, and the UN predicts there will be 4.27 million in the region by the end of this year. At the end of 2014, one in every five displaced people worldwide was Syrian.
Despite being the world’s single largest refugee crisis, the number of people fleeing is still far lower than the number of Afghans who were forced from their country following the Soviet withdrawal. According to the UNHCR, there were 6.3 million Afghans living in Pakistan and Iran in 1990.
The sheer number of Syrian refugees that have fled the war in their homeland is putting the international humanitarian system under huge financial strain.
At the end of June, UN aid agencies warned that a $5.5bn (£3.6bn) appeal to tackle the Syrian refugee crisis this year was less than 25% funded, putting millions of vulnerable people at risk – a situation that has already led to cuts in vital assistance.
Last week, the UN World Food Programme (WFP) warned once again that it was running out of money to feed the refugees and could be forced to cut all help for the hundreds of thousands of Syrians in Jordan as soon as next month.
Muhannad Hadi, the WFP’s regional director for the Middle East, north Africa, central Asia and eastern Europe, said: “Just when we thought things couldn’t get worse, we are forced yet again to make yet more cuts.
“Refugees were already struggling to cope with what little we could provide.”
According to the agencies and their partner organisations, the shortfall has meant 1.6 million refugees have already had food assistance cut this year and 750,000 children are not attending school. 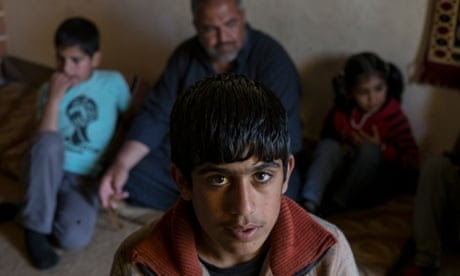 Young Syrian refugees give up hopes of education in Jordan

Read more
Most of Syria’s refugees have no prospect of returning home in the near future amid a conflict that has become increasingly complex and intractable.
In the north and north-east, Kurdish militias are fighting Islamic State in see-saw battles that continue to drive civilians across the border into Turkey. Turkey’s reluctance to absorb more refugees often leaves people stranded for days at the border.
In Aleppo and Daraa, two of Syria’s largest cities, rebels fighting the regime of the president, Bashar al-Assad, have pressed on with offensives that have encountered stiff resistance from loyalist troops, stalling the attacks.
But even if they were to seize the coveted territory, or begin an assault on the capital, Damascus, the country would be faced with the collapse of state institutions and services as the opposition attempts to manage a large metropolis such as Aleppo under unforgiving air strikes.
The regime’s collapse there would likely drive more refugees into neighbouring states, particularly Lebanon, where displaced Syrians already make up a fifth of the population, upsetting the delicate sectarian balance and stretching infrastructure past its breaking point. Lebanon has responded with increasingly stringent entry conditions.
Assad’s government and its Lebanese ally Hezbollah are fighting to secure the border region that straddles the two countries after a series of defeats that exposed the growing fragility of the Syrian army.
A recent global trends study by the UNHCR found that the level of worldwide displacement is higher than ever before, with a record 59.5 million people living exiled from their homes at the end of 2014.
The UNHCR estimates that an average of 42,500 men, women and children became refugees, asylum seekers or internally displaced people every day last year – a fourfold increase in just four years.
By the end of last year, there were 19.5 million refugees – more than half of them children – as well as 38.2 million internally displaced people and 1.8 million asylum seekers.
With war, violence and persecution leaving one in every 122 humans on the planet a refugee, internally displaced or seeking asylum at the end of 2014, the UNHCR warned that the world was experiencing an “age of unprecedented mass displacement”.