'Bodies on the street' in Homs crackdown 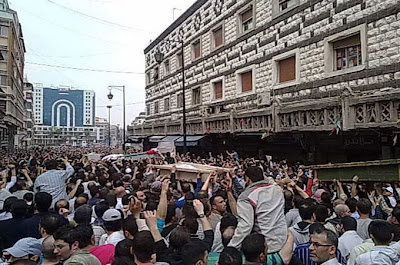 Gunmen on the streets 'shooting randomly' and reports of more deaths and arrests as Syrian security forces move in.

Shooting was continuing in different parts of Homs, but especially in the Baab al-Sebaa area, on Thursday. Activists claim that more than 50 people have been killed in the city since the weekend.

"Many gunmen on the streets [are] shooting randomly," Al Jazeera's Rula Amin said from Beirut, according to sources in Homs.

"People are telling us some of the injured and people who have been killed are still on the streets. People have not been able to pick them up because there's so much [gunfire]."

A resident of the city says mosque loudspeakers are calling for people to aid Bab al-Sebaa.

The resident, who spoke on condition of anonymity for fear of government reprisals, said the neighbourhood had been subjected to heavy machine-gun fire since 4am on Thursday....."
Posted by Tony at 4:36 AM