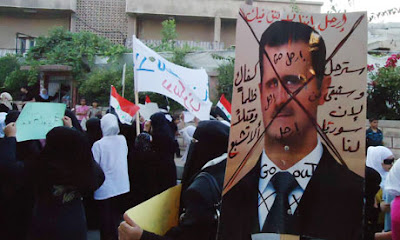 (Syrian anti-regime protesters carry a picture of President Assad that reads, "Leave. We don't trust you. You will leave and we will stay because Syria is ours. Enough of injustice and killing," during a rally in Damascus.)

"Hundreds of thousands of Syrians turned out for anti-regime demonstrations across the country on Friday with at least 11 people reported killed by security forces and tensions mounting in the runup to the Ramadan holiday.

Casualty figures – collated by two Syrian human rights groups – were down on previous weeks but the numbers of demonstrators appeared to be some of the largest yet seen in the four-month uprising.

In Aleppo, Syria's second city, unarmed military cadets were seen marching with civilian protesters and calling for the overthrow of the regime and the departure of President Bashar al-Assad.....

Syrian activists are warning protesters who imitate slogans from Egypt and Tunisia (where the army changed sides and helped overthrow both presidents) such as "the people and the army are one hand!" that they should not count on the military changing sides. "This is a very different situation here and we know that," said one Damascus activist....."
Posted by Tony at 4:45 AM