Egypt: too big for its boots 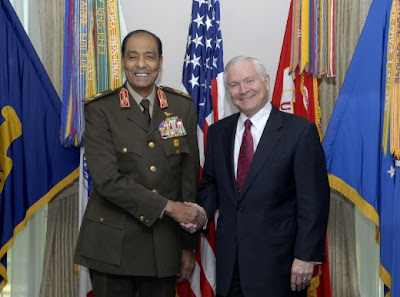 It is time to recognise that the Egyptian army's military, political and social role needs to be reduced, not expanded

"The Egyptian army has hardly fired a shot in anger since the last of the country's four wars with Israel in 1973. Apart from a marginal role in the coalition which pushed Saddam's troops out of Kuwait in 1991, it has not done anything for a generation which could be called military in any strict sense of the word. It might have played a part, possibly even a leading part, in the intervention in Libya, but, perhaps wisely, the generals in Cairo decided that trying to manage one revolution was enough.

Yet the armed forces account for a quarter of Egyptian government expenditure, run industries and farms and hotels, and are the beneficiaries of huge amounts of American aid. Now that the country is on the way to democratic rule, there would seem to be a powerful case for cutting the army's numbers, costs, perquisites, and privileges. But reports from Cairo suggest that some of the generals are angling for constitutional provisions that will enshrine the military's authority in society, protect its budget, and assign it a formal right of intervention in political affairs. This is a position akin to that which the Turkish armed forces arrogated to themselves in the past and from which both civilian and military institutions in that country are still trying to painfully extricate themselves today.

The army did of course perform the signal service of easing Hosni Mubarak from power. That was an intervention of the first importance, and might be regarded as earning it the right to intervene again in the future. Those in Egypt who fear an Islamist takeover may favour the kind of military protection of the secular state on which the Turkish army prided itself. Yet the Egyptian armed forces acted without any specific constitutional mandate in the spring. Why should they require one now to deal with some notional threat in the future? The problem with any special arrangements for the armed forces is that they would tend to reinforce the unnatural prominence of the officer corps in a country which has been at peace for decades. Nasser, Sadat and Mubarak all in turn trimmed the military's direct political role, but the army's share of national resources and its economic holdings nevertheless grew and grew.

These included the building up of an arms industry, and a range of other enterprises which have a mixed record but which would not in a European country be regarded as in the military ambit at all. They also include infrastructure projects which have helped development, and literacy and vocational programmes for conscripts which have had a positive effect. But the time has surely come to recognise that the Egyptian army's military, political and social role needs to be reduced, not expanded."
Posted by Tony at 4:36 AM