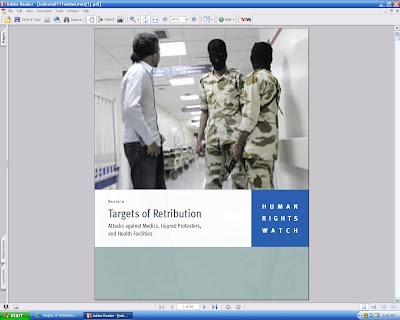 "This report documents serious government abuses, starting in mid-February 2011. These include attacks on health care providers; denial of medical access to protesters injured by security forces; the siege of hospitals and health centers; and the detention, ill-treatment, torture, and prosecution of medics and patients with protest-related injuries.

The government violations were part of the violent response by authorities to largely peaceful pro-democracy and anti-government demonstrations that began in February and continued months after military and security forces began a massive crackdown in mid-March, which led to the armed occupation of Bahrain’s main public hospital, the Salmaniya Medical Complex, on March 16.....

"The attacks on medics and wounded protesters have been part of an official policy of retribution against Bahrainis who supported pro-democracy protests," said Joe Stork, deputy Middle East director at Human Rights Watch. "Medical personnel who criticized the severe repression were singled out and jailed, among the more than 1,600 Bahrainis facing solitary confinement and ill-treatment in detention and unfair trials before a special military court."......"