Murdoch's ambitions in the Middle East 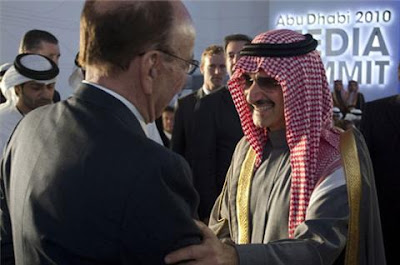 With his media empire under fire in the west, NewsCorp chief eyes the Middle East market.

"Embroiled in a scandal that has global implications, Rupert Murdoch's media empire is under fire due to the ongoing fallout resulting from the News of the World scandal.

But while News Corp remains under heavy scrutiny in the UK, US, and the rest of the West, the launch of Abu Dhabi-based Arabic language news channel Sky News Arabia is still on track.

For someone interested in assisting in starting a television network with a planned initial reach of 50 million viewers across the Middle East, Murdoch has an interesting perspective on regional issues that affect the would-be consumers of the new Arabic channel.

"My own perspective is simple", Murdoch told the Anti-Defamation League on December 13, 2010. "We live in a world where there is an ongoing war against the Jews."

Murdoch emphasised "the importance of good relations between Israel and the United States", stating: "Some believe that if America wants to gain credibility in the Muslim world and advance the cause of peace, Washington needs to put some distance between itself and Israel. My view is the opposite."....."
Posted by Tony at 9:41 AM