Poem which led to a savage beating... 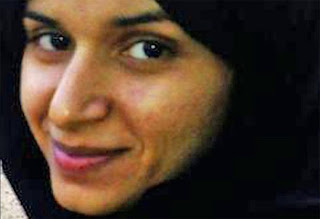 Bahrain’s protesters had a figurehead –Ayat al-Gormezi, but the poet paid a high price for her bravery

"Hers was the voice of a revolution. Released from prison last week, the 20-year-old poet Ayat al-Gormezi, a symbol of resistance for pro-democracy protesters, claims she was tortured in prison by a female member of Bahrain’s royal family. In an interview with i,MsGormezi said she was beaten with a baton by a woman whom prison guards identified as a member of the ruling al- Khalifa family.

She said while her interrogators had tried to blindfold her, she was able to see “a woman of about 40 in civilian clothes who was beating me on the head with a baton”. Ms Gormezi later described her interrogator to guards, who, she said, promptly named the woman as being one of the al-Khalifas with a senior position in the Bahraini security service. Ms Gormezi added: “I was taken many times to her office for fresh beatings. She would say: ‘You should be proud of the al-Khalifas. They are not going to leave this country. It is their country’.”

The guards explained it was not the woman’s regular job, but she had volunteered to question political detainees.....

Ms Gormezi described how in captivity she was beaten across the face with electric cables, kept in a tiny, freezing cell and forced to clean lavatories with her bare hands. She said she was most terrified by continuing threats from her interrogators that she would be sexually assaulted or raped. All the while, she was beaten on the head and the body until she lost consciousness. “Many of the guards were Yemenis and Jordanians,” she said.....

International protests and ensuing bad publicity for the Bahraini monarchy led to her treatment improving, according to her family.

Ms Gormezi was brought before a court on 12 June and sentenced to one year in prison. Last week she was called to an office in the prison and told she was to be released on the condition that she would not take part in any other protests."
Posted by Tony at 3:53 AM