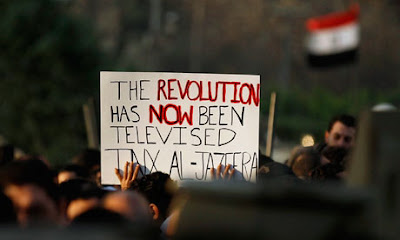 Ian Black: While most Arab states sit on the fence, Qatar is standing up to Damascus over an attack on its embassy

"Qatar lived up to its reputation as a maverick in Middle Eastern politics this week by suspending the operations of its embassy in Damascus. The emir of the small but fabulously wealthy Gulf state has already gone far beyond the Arab consensus by supporting the Libyan rebels, sending cash and weapons to help them in their fight against Muammar Gaddafi. The United Arab Emirates is doing the same, but in a lower profile way.

Qatari investments in Syria have also reportedly been frozen, but the emirate was not reacting directly to Syrian repression. The measures were taken in response to attacks on its diplomatic mission in the leafy Damascus suburb of Ein Rummaneh, which was pelted with stones, eggs and tomatoes in protest at coverage of the unrest by al-Jazeera TV. The satellite channel is owned by Qatar, based in Doha and watched by millions of Arabs.

Qatar's moves, in the words of analyst Karim Sader, were "more like a shrewdly calculated divorce from the Syrian regime than a fleeting spat".

Other, more discreet action, is afoot. Arab media circles are rife with rumours of financial support from Qatar, the UAE and the Saudis for Syrian opposition groups— paying for conferences, communications and perhaps more......

But Syria's crisis is mainly a problem for Arabs. This week the Arab Writers Union, meeting in Cairo, held heated discussions about the situation in Syria, Yemen and elsewhere in the region, but its final communique managed only to condemn the crushing of peaceful protests "in more than one country" - without daring to name which ones.

As Ahmed Asfahani, commentator for the pan-Arab daily al-Hayat, put it: "If even Arab writers can't protest about what's happening in Syria, what hope is there that their governments will do anything?""
Posted by Tony at 3:53 AM