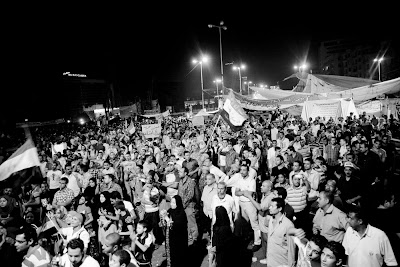 Egyptians are continuing to stage protests calling for change in Cairo's Tahrir Square.

"In what is being described by many Egyptians as the country's "second revolution", tens of thousands are currently staging protests and sit-ins in Cairo, Alexandria, Suez and other cities in the biggest wave of protests since the fall of Hosni Mubarak on February 11. The 18-day uprising toppled the former dictator, however, many demonstrators maintain that his legacy is alive and well in the current administration. Anger now is directed toward the ruling military council and caretaker prime minister Essam Sharaf's transitional government.

Since July 8, protesters have been camping out in Cairo’s Tahrir Square, the epicentre of the uprising."
Posted by Tony at 9:35 AM