Sacking Zahi Hawass is a sign of Egypt's ongoing revolution 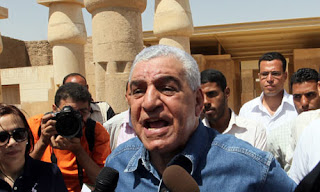 He may liken himself to Indiana Jones, but the minister of antiquities epitomised all that was wrong with Mubarak's Egypt

"....Since Hosni Mubarak's departure from office, protests that demanded the removal of Hawass from his position as minister of antiquities were uninterrupted. These were held by fellow archaeologists, the guards of heritage sites, or simply Tahrir Square protesters who see him as an antiquity that they have no interest in embalming from the era of Egypt's latest pharaoh, Mubarak. This pressure has yielded results and Hawass did lose the job he was offered during the 18-day revolution in a cabinet shuffle that aimed, but failed, to calm down angry anti-Mubarak protesters.

If Egyptian archaeology was a country, then certainly Hawass would be its Mubarak. Just like his former boss, he is besieged by allegations about his business interests, accusations of turning Egypt's archaeology into a one-man show by claiming credit for scientific findings and being the sole speaker about Egyptology in the local and international media. Of course, he's also committed the unforgivable sin of being one of Mubarak's favourite men....

The sacking of Hawass, Egypt's latest victim of the revolution, shows that the 18-day revolution was only the mother of numerous baby revolutions against little pharaohs or mini-Mubaraks in ministries, universities, factories, political parties and so on, and his departure marks another victory for those trying to clear the country of its deep-rooted authoritarianism."
Posted by Tony at 4:03 AM