Assad's Alawites: The guardians of the throne 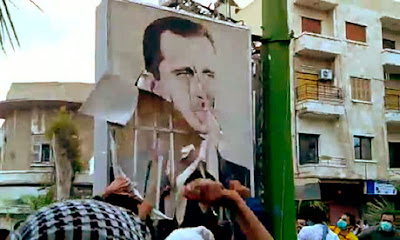 Syria's Alawite community have a history of persecution, but dominate the ruling family's security forces.

"....Prejudice in all its forms - racism, sexism, sectarianism - exist in all societies, but, in times of crisis, collective identity often comes to dominate social relations. Identity is complex and membership of ethno-religious sects is only one part of Syrian identity. Social class, profession, nationalism, regional identities and other factors are all very important. But one is born into a sect and few but the wealthy elite transcend these classifications, typically revealed by one's name and place of birth. As in the Balkans, religious identities are often cultural identities and lead to ethnic-like divisions, even within same-language groups.....

With an identity based on Assad's rule, they have adopted slogans such as "Assad for ever", unable to separate themselves from the regime or imagine a Syria without Assad. Alawites who dare to oppose the regime believe they will face extra punishment for their "betrayal".

The Muslim Brotherhood rebellion which began in 1976 and led to a civil war between 1979 and 1982 determined how many Alawites see the current uprising. The Brotherhood attempted to rally the Sunni into a sectarian struggle. Many Alawite intellectuals, judges and doctors were assassinated. The massacre of Alawite officer candidates in the Aleppo military academy in 1979 - as well as the assassination of Alawite Sheikh Yusuf Sarem - remain fresh in the community memory.

The Sunni majority, meanwhile, remember the brutality with which the Brotherhood's armed uprising was crushed. The Brotherhood was destroyed within Syria and remains largely absent from the current uprising, even if most of today's protesters are conservative Sunni. This year's is also a popular and leaderless uprising, especially of the poor, unlike the Brotherhood's rebellion. While the Brotherhood lost much of its credibility after that crackdown, it remains influential in the diaspora-based opposition, which encourages Alawite fears.

The historian Hanna Batatu wrote in 1981: "Working for cohesion at the present juncture is the strong fear among Alawis of every rank that dire consequences for all Alawis could ensue from an overthrow or collapse of the existing regime."....

When Hafez al-Assad took power, he eased the Baath Party's secularisation, attempting to reconcile Alawites with Sunni religious practices. He also proceeded to emasculate the Baath Party, turning it into the Assad Party. Alawite solidarity and the support of some rich Sunni families bound the regime together. And as the Baath Party, unions and syndicates were weakened, conservative Sunni Islam filled the social vacuum, with Islamic charities allowed to play a growing role. Sunni clerics were also given more freedom - which first increased the regime's base of support, but now fuels divisions between Sunni groups and the Alawite-dominated security services.

Iraq's Saddam Hussein "Islamised" his Baath party to legitimise his rule, but the Alawite Assad family appear to fear giving a democratic opening to the Sunni majority will cause the entire system to collapse. The weakness of the Baath party also means the regime cannot mobilise people around anything but Bashar al-Assad, who took power following his father's death in 2000.

It is easy to tell if you're in an Alawite area in Syria these days. It will be the place where every available space is festooned with pictures of President Bashar, his brother Maher or their father Hafez. It is a cult of personality, with walls bearing the graffiti: "Assad forever," while men zip back and forth on motorcycles, all wearing t-shirts bearing Bashar's portrait....."
Posted by Tony at 1:15 PM