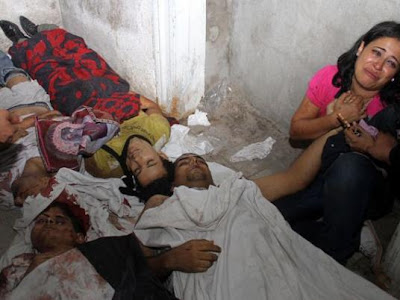 "Families of those killed in the Maspiro clashes on Sunday night congregated at the Coptic Hospital on Monday morning, as their loved ones were about to be buried....

Twenty-four people died, according to the Health Ministry, as clashes erupted when a Coptic march approached the state TV building, known as Maspiro, in central Cairo. The march started in the largely Christian neighborhood of Shubra, to protest against attacks on Christians, most notably the recent one on a church in the Upper Egyptian city of Aswan by Muslims, who said the church was not allowed to have a dome.

At the morgue of the Coptic Hospital, where 22 of the dead were [This implies that, at most, only 2 of the dead were from the military], families gathered chaotically to identify the dead bodies. On his way out of the morgue, a young man became hysterical, weeping and jumping before hitting his head on the wall.

Inside the morgue, dead bodies were lying next to each other. One victim's face was caved in. Atef Naguib, a clerk working at the morgue, said he was one of those run over by military armored personnel carriers. When the thousands marching arrived at Maspiro, witnesses say the military vehicles drove into the crowd and ran over several protesters [See video below]. Three dead bodies were being kept in the morgue’s refrigerators. They were also victims of the armored personnel carriers and their faces were completely deformed.

Naguib also showed reporters bodies that had received bullets to their heads. Gunfire was also witnessed during the clashes - the army shot bullets intensively once the march arrived at Maspiro.

“All dead bodies were either run over by the military vehicles or shot with gunfire,” said Soad Akhnoukh, a medic at the Coptic Hospital.....

“We just want to hear [Field Marshal] Tantawi say it out loud: I don’t want Christians in the country,” said an angry Coptic woman in the hospital. “Tantawi is a dog,” said someone else. As a Muslim activist expressed solidarity with the Coptic woman, she told him that the problem is not between Christians and Muslims, but between the military and Christians.

Some families said they won't be a the funeral at the nearby Coptic cathedral if a military representative will be there. "We all saw what happened, and that there is no need to cut into the bodies for no reason. The martyrs are pure now," said a family member. Inside the morgue, families had ornemented the coffins with flowers and images of Jesus.

The site of the hospital in Ramses Street saw street battles until early Monday morning, as thugs threw Molotov cocktails and burned cars. Medics at the hospital expressed shock at the lack of security around the building [That is not the duty of the military??]."
Posted by Tony at 4:20 AM