The attack on Egyptian Christians was not sectarian. We will uncover the truth 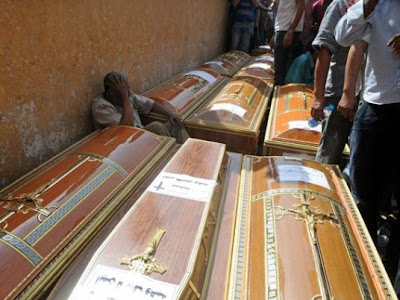 "So it's happened again: Egyptian Christians have been killed and the ether is ablaze with talk of "sectarian violence" and the absence of "law and order". And that's exactly what the ether is being set up to do.

This latest outrage, leaving 25 people dead, is yet one more episode in the dirty drama we hoped our revolution would pull the final curtain on. It beggars belief that it continues, and that it elicits the same obsolete responses.

We now know a previous massacre, the bombing of the Church of the Two Martyrs in Alexandria in December, in which 21 were killed, was the work of Mubarak's ministry of the interior. It was beyond sickening that a government would kill its citizens in an attempt to turn them against each other – and Muslims flocked to stand with their Christian friends at Christmas mass.

Now, we live Sunday's murders and again this was no sectarian violence. This was the army murdering 25 citizens – with 310 still injured. It seems clear that the soldiers believed they were being attacked by Christian protesters. And it's also clear that they were set up to believe this. State TV issued a call for Muslims to "protect the army" – then three broadcasters dissociated themselves from TV "policy". So who is setting this policy?......

And now this happens. So who wrote this latest episode? Who is working our perceived sectarian faultline to derail the revolution?

In Tahrir, a central plank of the revolution was expressed in the symbol of the cross nestling in, filling out the crescent. And the chant: "Say It Mina, Say It Hussein: We Are All Egyptians Here." And one of the young men murdered yesterday is called Mina. Mina Daniel. And my nephew, a Muslim – not that it should matter – mourns him in a tweet as "my brother, my double. How do we go on living?"....."
Posted by Tony at 6:40 PM