The Real Story of How Israel Was Created 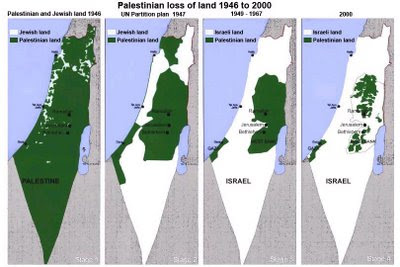 "To better understand the Palestinian bid for membership in the United Nations, it is important to understand the original 1947 U.N. action on Israel-Palestine.

The common representation of Israel’s birth is that the U.N. created Israel, that the world was in favor of this move, and that the U.S. governmental establishment supported it. All these assumptions are demonstrably incorrect.

In reality, while the U.N. General Assembly recommended the creation of a Jewish state in part of Palestine, that recommendation was non-binding and never implemented by the Security Council.

Second, the General Assembly passed that recommendation only after Israel proponents threatened and bribed numerous countries in order to gain a required two-thirds of votes.

Third, the U.S. administration supported the recommendation out of domestic electoral considerations and took this position over the strenuous objections of the State Department, the CIA, and the Pentagon......"
Posted by Tony at 6:47 AM