A Nobel for the Arab Spring 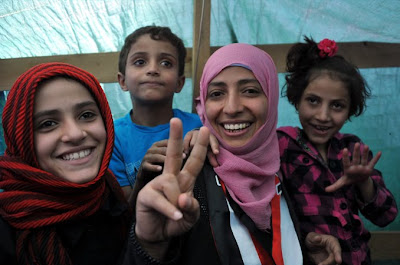 "The shared Nobel Peace Prize given to human rights activist Tawakul Karman is rightly deserved. It's more deserved than the award given to Obama in 2009. Partly, it is an accolade for the entire Arab Spring and its unsung heroes. Partly, it recognises the revolutionary kudos of woman power in the advent of the Arab Spring.

However, there are a few legitimate questions that must be posed. In particular, to what extent does the award understate the power of the powerless?

Where there is a will…

The 32-year-old Yemeni female activist name literally means "determined" and "endowed with resolve, initiative and will". And Tawakul lives up to her name. This perhaps explains why a petite female Islamist mother of three has been steadfast in her non-violent activism and tenacity, sustaining a sit-in since the eruption of the Yemeni protest movement several months ago. Yemeni friends describe her as audacious, courageous, street smart, sagacious, gracious and down to earth.

Probably what makes Tawakul stand out is her healthy position towards dogma. Although ideologically an Islamist, in practise she favours a brand of civic politics that champions equal protection for all even under secular arrangements.

And perhaps this is the ideal type of Islamist politician that the Arab Spring needs right now for mature democratic fruition - a visionary woman from the reform and Muslim Brotherhood-linked al-Islah party.....

This particular Nobel expands the politics of recognition to a single female individual as well as to an entire movement. But ambiguity is inevitable. For, this recognition through the naming of a single actor oddly enough restricts this very recognition by 'fixing' it in a single person.

The elan of moral protest in the case of the Arab Spring is that it has persistently lacked a Che, a Khomeini or an Aung San Suu Kyi. The gain is the plurality embodied in a broad movement driven by ideals not mortals or ideologies.

There are thousands of voices from within the Arab Spring that carry on the moral flame of protest against corrupt and authoritarian political elites. They are all Tawakul. The nobility of the struggle waged by all these free Arabs is not up for grabs.

Nobel or no Nobel, the march for Arab freedom shall stay the course as Bouazizi, Tawakul and others keep on displaying...."
Posted by Tony at 6:54 AM