Journalists demand resignation of information minister in wake of Maspero 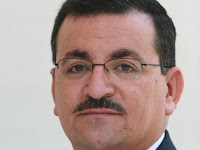 "....In a statement handed out during the march, the group accused Minister of Information Osama Heikal of having “primary responsibility” for “prejudiced” media that “incited sectarian violence against peaceful demonstrators.”

State media have come under heavy criticism for their coverage of the Maspero violence, with accusations that it deliberately stoked anti-Christian sentiment by falsely announcing that three soldiers had been killed by Coptic protesters.

The minister of “misinformation” had “humiliated” the Egyptian army when state media broadcast an appeal for help to protect the army from peaceful protesters, because “it made the army – which is supposed to protect the country – appear as if it can’t protect itself,” said the group.

Olfat Abd Rabo, a journalist, said she had taken part in Sunday’s demonstration and had seen people being killed with live ammunition. “The disgusting media announced on TV that the army was coming under attack at the same time as the peaceful protesters were being crushed and killed....."
Posted by Tony at 4:19 AM