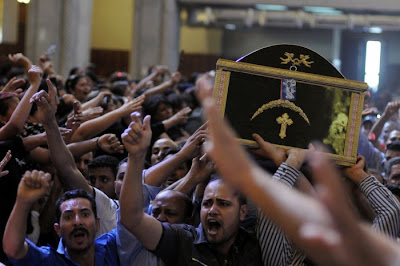 "CAIRO (AP) — Tens of thousands of Egyptians chanted overnight and early Tuesday against the ruling military council during a massive funeral procession for 17 Christian protesters killed in a Cairo protest.

Slogans of "down with military rule" interrupted the prayers, as many accuse the military of bearing primary responsibility for the violence which led to the deaths of 26 people and the injury of more than 500 others on Sunday.

"The people want to topple the Marshal", the mourners chanted in reference to Field Marshal Hussein Tantawi, the head of the ruling military council, which took over power on Feb. 11 after the ouster of Hosni Mubarak in a mass uprising.

The slain protesters were marching toward Cairo's television headquarters when they came under attack. Forensic reports said many deaths were caused by armored vehicles that ran down protesters, or by gunshots.

The military, on the other hand, issued a stern warning that it intended to crack down hard on future protests....."
Posted by Tony at 3:42 AM