A firsthand account: Marching from Shubra to deaths at Maspiro 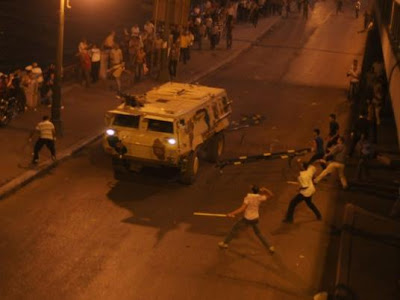 ".....Outside the Ramsis Hilton Hotel, the chanting stopped momentarily - the exuberance of having escaped the attack in Shubra faded as the march rounded the corner toward Maspiro.

It was immediately met with gunfire in the air. As protesters continued moving forwards, the gunfire continued.

Suddenly, there was a great surge of people moving back, and something strange happened. Two armored personnel carriers (APCs) began driving at frightening speed through protesters, who threw themselves out of its path. A soldier on top of each vehicle manned a gun, and spun it wildly, apparently shooting at random although the screams made it difficult to discern exactly where the sound of gunfire was coming from.

It was like some brutal perversion of the military show the armed forces put on for the 6th of October celebration three days before. The two vehicles zigzagged down the road outside Maspiro underneath the 6th of October Bridge and then back in synchronicity, the rhythm for this particular parade provided by the "tac tac tac" of never-ending gunfire, the music the screams of the protesters they drove directly at.

And then it happened: an APC mounted the island in the middle of the road, like a maddened animal on a rampage. I saw a group of people disappear, sucked underneath it. It drove over them. I wasn’t able to see what happened to them because it then started coming in my direction..... "
Posted by Tony at 9:53 AM