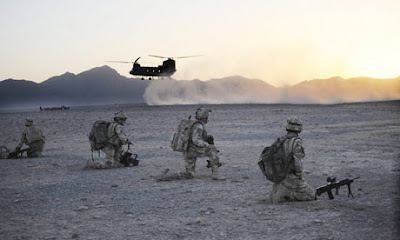 "A NATO helicopter has crashed in east Afghanistan during an anti-Taliban operation, killing at least 31 members of the US special forces and seven Afghan troops, a statement from the Afghan president's office said.

"President Hamid Karzai was grieved by the deaths of 31 American Special Force troops after a helicopter they were on board crashed in a province," the statement said.

"Also on board this chopper were seven members of the Afghan Forces who too were all killed in the crash," it added, offering condolences to the families of the victims.

The Taliban has claimed responsibility for the crash.

The aircraft came down late on Friday in the eastern province of Wardak, southwest of the capital Kabul, Shahidullah Shahid, the provincial spokesman, said....

In a written statement, Taliban spokesman Zabiullah Mujahid said the group claimed responsibility for the crash.

He said NATO had attacked a house in Sayd Abad where Taliban fighters were gathering on Friday.

The Taliban then fired on NATO and downed the helicopter, killing the crew, Mujahid said.

There have been at least 17 coalition and Afghan aircraft crashes in Afghanistan this year."
Posted by Tony at 3:20 AM