A Judas Kiss to the Poor 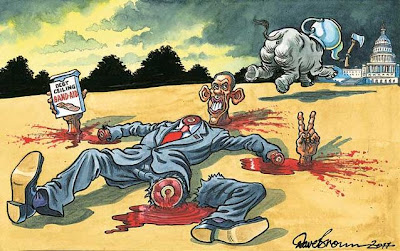 "The unconscionable result of the manufactured crisis over the debt ceiling shows that the political Right knows how to play hardball, and that President Obama and his hapless party know how to get rolled. There are other options; and we, the people, need to press them home.

The Obama-brokered deal on debt and spending was certainly what the Germans call eine schwere Geburt (a difficult birth); this one should have been aborted.

The Obama surrender reminds me of a sermon that Dr. Martin Luther King gave during the turbulent 1950s, in which he peered into the future and issued a prescient warning: "A nation or a civilization that continues to produce soft-minded men purchases its own spiritual death on an installment plan."....."
Posted by Tony at 7:23 AM