Caging Mubarak: 'The Pharaoh has no clothes'

The trial of the former president of Egypt shows how the "rule of the mighty" is being replaced by the rule of law.

"An Arab president in a cage adds panache to the Arab Spring. The mighty Arab Spring has thus far catalysed the fall of the strong and the humbling of two arrogant power-makers.

Beyond catharsis and retribution, what does the "caging" of Mubarak and his trial imply for Egypt and the wider Arab Middle East?

The king is the law, no more 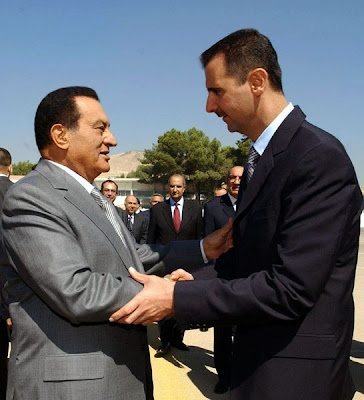 The image of the cage made of of mesh and bars, in which Mubarak appeared, humbled, will be haunting the powerful across the Arab world. Bashar al-Assad, Gaddafi, and many more must have taken notice. And so they should.....

The law is king

Mubarak - in the cage and on trial - will last in the memories of the free as some redress, and may be a milestone in Egypt's journey towards the rule of law.

In a cage, or on that stretcher, it matters not whether the emperor has clothes. What matters more is Thomas Paine's pearl of wisdom that, in good government, whether in America or Egypt, the law ought to be king. Egypt is on track: the chapter of the king as the law is being closed."
Posted by Tony at 3:05 PM