US credit rating downgraded to AA+ by Standard & Poor's 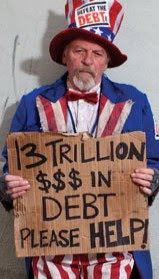 "The United States lost its AAA credit rating late on Friday night, ending another wild day on the world stock markets and prompting fears that next week could be equally as calamitous.

Rating agency Standard & Poor's decision to cut the US debt rating could have dire consequences, increasing the cost of borrowing for the US and setting off more panic selling when stock markets open again on Monday.

S&P had held back cutting the rating earlier in the day, after the US government reportedly questioned its maths. But the agency insisted it was cutting America's top AAA rating by one notch to AA-plus, saying the deficit reduction plan passed by Congress on Tuesday did not go far enough to stabilise its debt situation.

This is the first time that S&P has issued a "negative" outlook on the US government since it began rating the credit-worthiness of railroad bonds in 1860.

The dramatic reversal of fortune for the world's largest economy means that US treasuries, once seen as the safest investment in the world, are now rated lower than bonds issued by countries such as the UK, Germany or France....."
Posted by Tony at 3:37 AM

I think the admin of this web site is actually working hard in support of his web page, for the reason that here every data is
quality based information.
my web site: write eBooks fast

Hi there, of course this post is in fact good and I have learned lot
of things from it about blogging. thanks.
Stop by my webpage ; Exhaust fan

Hi there, of course this post is in fact good and
I have learned lot of things from it about
blogging. thanks.
Also see my page > Exhaust fan

Hello There. I found your blog using msn. This is an extremely well
written article. I will be sure to bookmark it and come back to
read more of your useful information. Thanks for the post.
I'll certainly comeback.