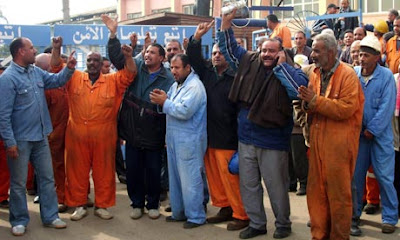 "An Egyptian trade union federation that was used by the government to repress labour activism has been dissolved, dismantling another powerful component of Hosni Mubarak's dictatorship.

Since its creation in 1957, the state-run Egyptian Trade Union Federation (Etuf) had been the sole official outlet for labour activism in the country. Through affiliates that supposedly represented workers at all levels of Egyptian society, the federation played a key role in blocking strikes and intimidating any labour organisers perceived as a threat to the ruling elite.....

Egypt's interim cabinet spokesman Mohamed Hegazy this week announced that the federation would be dissolved after judges ruled that elections to the board had been fraudulent. It is not yet clear whether a new board will be formed or whether the nascent independent federation of trade unions will take its place....."
Posted by Tony at 8:39 AM