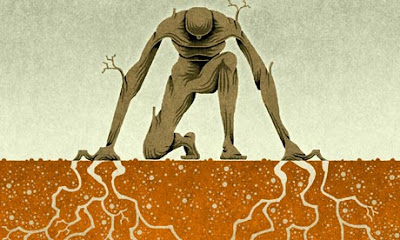 Abbas's UN appeal, combined with the civil rights fight inside Israel, is changing the nature of the Palestinian struggle

"There is an Arabic word you come across a lot when Palestinians talk about their future. Sumud means steadfastness, and it has turned into a strategy: when the imbalance of power is so pronounced, the most important thing to do is to stay put....

This is not a casual shift, as it could affect outcomes. If Israel ends its occupation of the West Bank, and allows it to join with Gaza, the result could be two states – a Palestinian one alongside an Israeli one. But if you accompany that with a civil rights movement inside Israel, the goal could be very different – a secular, democratic state "for all its citizens", where Jew, Christian and Muslim are equal. A one-state solution in which Jewish citizens lose an inbuilt majority. The end of Zionism, no less.....

"The only thing the world knows about Jaffa is oranges," says Shehadeh. "I am not an orange. [Benjamin] Netanyahu, when he was finance minister, called people like me a demographic timebomb. How can I explain to my children that they are a bomb?"

The discrimination suffered by his community is extensively documented. Half live below the poverty line, 48% can not build a house for the next 15 years because there no permits or plans. Only 19% of Arab women with Israeli citizenship are in a job, compared with 65% of Jewish women.

But the terrain of their changing identity and allegiance is not so well mapped. Israel demands expressions of loyality from them. Loyality to what, they ask. A democracy or a supremacist state?"
Posted by Tony at 3:50 AM