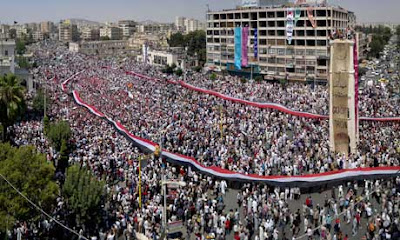 The Syrian city of Hama, the scene of a bloody crackdown by President Assad's army, has a long history of standing up to the brutal Ba'athist regime

"....."The regime divided people and made them suspicious of each other, but this uprising has started to bring us back together again," says a businessman in his 40s, sipping coffee in his house, a bullet hole on the whitewashed wall behind him. His mother, who lost another of her sons in 1982, keeps calling to check he is OK.

Though Hama's residents say history is repeating itself – the double-act of Bashar and his brother Maher, commander of the 4th armoured division, matches Hafez and his brother Rifaat, who led the 1982 assault – today's uprising is nothing like the ones before it. While clerics have taken a prominent role – the de facto negotiator for the city is the imam of Serjawi mosque and people have gathered in mosques – the strength lies in the fact that this is not a religious uprising. Protests in Hama are a reflection of protests across the country – broadbased, unarmed and, they add, morally justified.

"We are religious. But they are trying to portray us as extremists when we are not," is a common refrain from both men and women in the city. Instead, Hama's residents say they hope for freedom, for a government that treats them with dignity, and the end of 41 years of "Beit Assad" (the house of Assad). And if Syria's uprising succeeds, they may also be able to put the ghosts of 1982 behind them."
Posted by Tony at 3:58 AM